On our ranch, Roy Ridge, in the Anderson Valley, we planted a small orchard five years ago.  It has 38 trees and they’ve just started producing. Our daughter, Coco, loves the orchard and it’s been an amazing way to teach her to appreciate growing food. We make trips out there in the spring to observe the blossoms and the bees, in the early summer to pick cherries, and now to examine what’s ripe and what’s not.  At two, she looks at an apple, tugs on the fruit and looks up at me saying “Papa, not ripe.”

Luckily, a forward thinking former owner of the property had previously planted a few fruit trees.  One of these being a peach which produces an amazing bounty of the largest, sweetest peaches I think I’ve ever eaten – and that’s saying a lot coming from someone raised in Georgia.  So, in anticipation of having the bounty of an entire orchard to preserve in the coming years, we took it upon ourselves to further Coco’s agricultural education and spend some time making jam.  All in all, it’s a great way to spend a Saturday morning as well as having that self-righteous feeling of being the ant instead of the grasshopper.

Just in case you need it, here are the step-by-step instructions:

Before starting, get your jars and lids ready.  We had a few hundred mason jars left over from our wedding 4 years ago (they served as cocktail glasses) and we had kept all the lids and rims – I’m nothing if not thrifty!  Run the jars through the dishwasher on an extra hot cycle to sterilize them. Once clean, line them up on the counter so they’re ready to go.  Put the flat lids in a saucepan, cover with water and bring to a boil and then turn off the heat.  Keep them in the saucepan until ready to use.  Remember, you can’t reuse the lids for canning – they’re a one time deal.  The rims, however, you can reuse every year.

Next, turn your attention to the peaches.  I blanched the peaches to remove the skin.  Don’t even think of using a paring knife to peel them, it’s a waste of time and peach since a good chunk of the fruit goes into the compost with the skin.  Simply get a pot of water to a good boil, drop in a few peaches, pull them out 30 seconds later and dip them in a bowl of cold water to cool. The skins will just slide right off.  Cut the peaches in half and take out the pit and you’re ready to go. 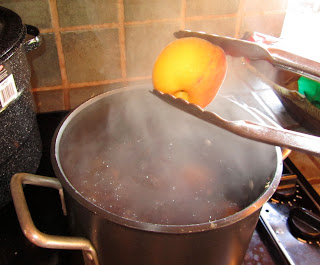 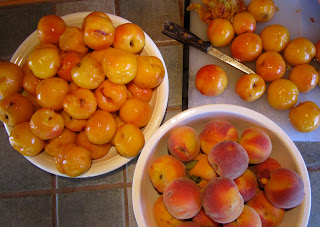 Cut the peaches into small pieces.  I like my jam chunky, so I left them about  ½” – ¾” or so.  Mix  4 cups of peaches, 3 cups of sugar, juice from 1 lemon and 1 box of pectin (I use Sure-Jell) into a large stockpot.  That’s less sugar than a lot or recipes call for, but I like to taste the fruit and not the sugar, also, did I tell you how sweet these peaches were!

Bring to a boil stirring frequently for about 20-25 minutes until the mixture thickens and drips off the spoon in heavy drops. Now ladle this peachy goodness into your sterile jars. Leave around 1/4″ at the top. With a pair of tongs, grab a lid, place it on top and screw the rim into place. 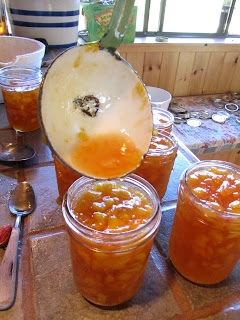 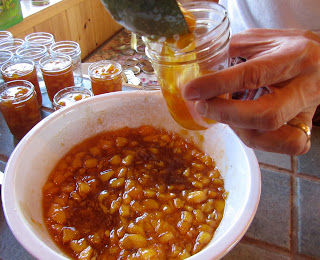 The next step is to actual “can” them – which basically seals them up so they can sit in your cupboard without refrigeration. For this project we invested in a canner.  For $19.00 from the local farm supply we got a beautiful black enamel stockpot with a wire canning insert made specifically for holding jars and lowering and raising them out of the boiling water.  Definitely worth it, plus it looks like something my grandmother would have, which I love.  If you don’t have a canner, simple use a large stockpot and place a few jar rims on the bottom to keep the jars from resting on the bottom of the pot. Fill the canner with water and bring to a boil.  Set the jars into the insert and slide it into the canner and boil for 10 minutes.  Remove the insert carefully and move the jars to somewhere to cool.  In a few minutes you’ll hear the re-assuring pop! of the lids as they seal with the cooling of the jam. 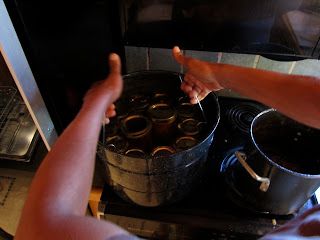 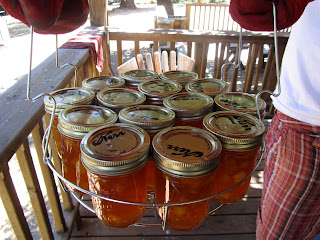 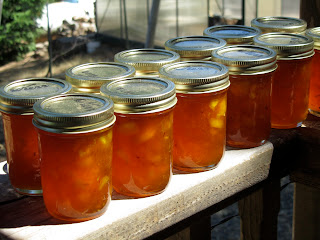 That’s all there is too it.  These jams can sit in your cupboard for years….well, I think years, we never make it through the winter without eating all of them!